Ray Wozniak has lived all over the world. “Growing up I lived in Beirut, Lebanon…I graduated high school in Greece!” he explains. He’s now called California home for decades and luckily, most of his projects keep him nearby. “I’m currently pulling cables, permitting, doing finish-work, and things like that in a nine-story office building here in Santa Ana,” says Ray, who lives in southern CA, “but most of my jobs usually have me in LA, Orange County, Riverside…places like that.” He’s a true Californian now, spending most of his free time deep sea fishing and dabbling in golf. 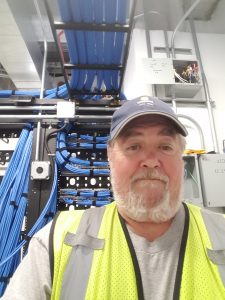 Ray’s been working in telecom since the late 1980s when he performed well on a test for a telecommunications trade school. “I was fairly good at it so I went through a trade program and got work pulling cable and dabbling in side jobs selling early electronic phones,” he says.  Eventually Ray landed at an early internet company. “I started in on the ground floor of networks, wiring them up back when they were all coaxial cables,” he explains. Since then, Ray’s worked with a veritable Who’s Who of the telecommunications industry – Verigent was lucky to touch base with him back in February of 2018.

“When I talked to Verigent the first time, I told my recruiter that I was looking for 40 hours or more a week and the longer term the job, the better,” Ray explains. “They’ve come through for me very well.” He goes on, “Other companies would be a couple of jobs here, a couple of jobs there…but Verigent is the best and most productive staffing firm that I’ve worked with. They’ve always kept me busy.”

“My recruiter Michael,” says Ray, “he’s one of the best! If I call him with questions on anything he gets back to me right away. He is the go-between for the people I’m going to be working for and he makes sure that everything runs as smoothly as possible.”