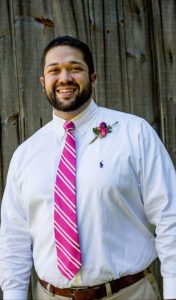 When Josh Ainsworth starting working with the career center to find a job after graduation during his senior year at Appalachian State, the HR major didn’t necessarily know where he’d end up. “The career center did an awesome job helping us find job opportunities to apply for, and they’re actually how I found out about Verigent,” he explains. Nearly six years (and a lot of changes) later, Josh’s career with Verigent is still moving forward.

“I started out as a recruiter,” says Josh, “and I recently transitioned to a new position as a Strategic Account Manager for our national accounts. I’m still slightly involved on the recruiting side as well, but now I’m doing a lot of work directly with clients to build relationships.” Josh goes on to explain that in his recruiting role, he often had the opportunity to assist his manager with client-facing responsibilities, paving the way for his new position. “It was a natural progression that happened,” he says. “I’ve seen a lot of changes as the company’s grown and we continue to learn and grow!”

What keeps Josh motivated here at Verigent? “I’ve built a lot of relationships with people. My favorite thing about Verigent is definitely my coworkers,” he explains. “What I really enjoy deep down is working with people internally within our company. Eventually I’d love to transition over to a role where I’m able to help motivate others here in the office and work with them to achieve their goals.” And although the growth at Verigent has been rapid, Josh says the company has never lost touch with its employees. “It’s pretty much an open-door policy here,” he says. “You can basically go to the top with any idea and it will be considered for implementation.”

When he’s not assisting clients or keeping up office morale, you’ll find Josh and his wife of two years, Morgan, at rock concerts. “On the weekends, we’re rarely here in town!” he says. “We love going out and seeing live music and hitting the road to see new cities. We’ll go just about anywhere!” Josh’s zest for life is infectious, and we’re lucky to have him as part of the always-growing Verigent team.