Paul Carlson has been in telecom dating back to when Jimmy Carter was in office. With over 25 years of experience at once-colossal Ma Bell, plus over a decade more after, he’s been inside the industry long enough to have seen his fair share of changes. Along the way, he did a lot of learning on the job. “I started as a telephone operator when they still had those!” exclaims Paul, “and I kept taking skills tests within the company and eventually moved over to the technical side of things where I’ve been for a long time now.” 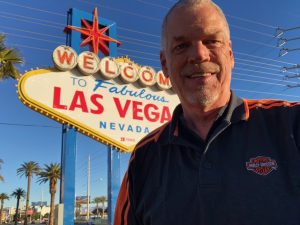 After many, many years working for large telecom corporations themselves, Paul decided to move from his home state of New York to sunny Las Vegas back in 2000. Since then, he’s continued to learn and grow within his industry and for the last year, he’s been in touch with a Verigent recruiter. “She worked really hard to find me something,” says Paul “and we touched base just about every week until she did.” About six months ago, Verigent found Paul a great role within a brand-new call center in Las Vegas where he manages an extensive phone system. Explains Paul, “I move phones, add phones, change the phones out when agents come and go, and upkeep all the administrative details behind the scenes. I work with another location we have here in Vegas and I take care of issues in our Reno center remotely.”

Paul says he’s hopeful the role will turn permanent because, “it’s definitely a nice place to work! The people here are actually happy with what they do which makes for a nice environment.” Until then, he says his experience working with Verigent has been seamless. “They’re so easy to work for. Everything is done and I don’t have to worry about a thing. Each week I get email reminders to log my time and the check is deposited when I expect. The team has been very helpful, the benefits seem pretty great so far, and everyone’s so friendly!”